The Dawn spacecraft recorded this color sequence on approach to the large 535-kilometer-wide asteroid Vesta in June 2011. It shows enhanced color extending beyond human range into the near infrared. Major color differences are apparent even at this resolution. Pale greens are associated with a diagnostic composition (equivalent to a gabbro or basalt). These colors are associated without the large impact basin at the South Pole, at the bottom of Vesta in these views. The composition of the orange craters near the center of the sequence is still unresolved.

This perspective rendering, color-coded to highlight topography (warm colors are high, cool colors are low), shows the South Polar region, with Rheasilvia in the center. The basin is dominated by the 200-kilometer-wide 22-kilometer high central complex, a large conical rise of uplifted material. The floor of the basin is scarred by linear and curved fault scarps formed when the basin collapsed during impact. These are best seen in the foreground. The large gap in the far rim is actually the location of an older 40-kilometer-wide impact (Veneneia) which predates Rheasilvia.

This high-resolution view (~20 meter per pixel) shows a wide swath of equatorial Vesta, including several of the large broad troughs that encircle the asteroid. These troughs are 10 to 30 kilometers across and formed when Vesta underwent a period of extension, likely associated with the formation of the large impact basins at the south pole.

The reddish and purplish colors may be associated with OH bonds in the minerals and rocks, consistent with hydration of some materials on Vesta (whether these are inherent to Vesta or brought in by meteorites is not yet resolved.) Irregular pits within the small central floor deposit are likely due to gas exsolution in the impact melt deposits, producing outgassing as the melt solidified. Ejecta and flow within the ejecta can be seen to the south and south east.

At 60 by 72 kilometers, this oblong crater is the largest intact and well preserved crater on Vesta that post-dates the giant South Pole basins. It is rich in detail. Impact melt flows and ponds are visible around the rim (especially at [a]). Small debris slides form a "ring" of narrow fingers along parts of the crater rim [b], exposing dark and bright materials within the crust of Vesta. The sloping rim wall of Marcia is covered in thin impact melt and debris flows [c]. The flat floor features numerous irregular outgassing pits and a small putative central peak at crater center. 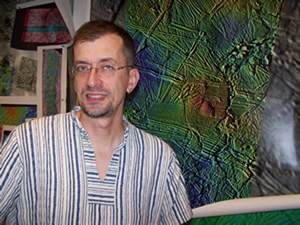 Paul Schenk's first formal introduction to planetary sciences was as a NASA Planetary Geology summer intern in 1979 at JPL during the Voyager 2 Jupiter encounter. Working as an intern with the Voyager mission team during one of its encounters was an unforgettable experience, and since 1992 Dr. Schenk has been an intern advisor for LPI's summer intern program. In 1988, he earned his Ph.D. at Washington University in St. Louis under Dr. William B. McKinnon and came to the LPI in 1991. Since his arrival, he has been using Voyager, Galileo, and Cassini stereo and monoscopic images to map the topography and geology of the icy outer planet satellites (and dabbled a bit with Mars and the Moon).

Dr. Schenk is also a stereo image aficionado, and in 1997 completed an educational CD-ROM entitled 3-D Tour of the Solar System showing the planets in 3-D. In 2012, his book Atlas of the Galilean Satellites was published by Cambridge University Press.

Since 2012, he has been a Participating Scientist on the Dawn (at Vesta) and Cassini missions, studying impact cratering on small bodies and plume deposition processes on Saturn's moon Enceladus.