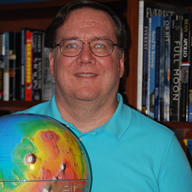 NASA's Magellan mission to Venus in the early 1990s provided most of our knowledge of the geology of Venus. Radar observations penetrated the clouds of Venus, revealing the distribution of volcanism and tectonic faulting and measuring the planet's topography. In addition, Doppler tracking of the Magellan spacecraft's orbit around Venus allowed mission scientists to measure the slight variations in gravity from place to place across Venus. These gravity observations can be used to look inside of Venus and "see" regions of more dense and less dense rocks. For example, these measurements provide information about how the thickness of the crust varies with location. These measurements can also be used to map areas of hot, rising rock and cold, sinking rock in the mantle of Venus. My research about Venus combines these various datasets to provide improved knowledge about the tectonic, volcanic, and thermal evolution of Venus and about the planet's internal structure.

A radar image of part of the Devana Chasma rift system. The numerous, radar-bright linear structures are faults, which contributed to the development of Devana Chasma. Most of the faults are oriented roughly north-south.

A shaded relief image of the topography of part of Devana. The deep rift valley is cut into a broad swell of high topography.

Devana Chasma is an extensional rift system on Venus, 4000 km long, 150 to 250 km wide, and up to 5 km deep. The measured horizontal extension is 10 to 20 km, similar to continental rifts such as the Rio Grande Rift and the East African Rift system on Earth. My quantitative models for the observed gravity anomalies and topography indicate that the crust is thinned beneath the center of Devana, consistent with the rifting interpretation. Low density mantle material beneath the rift is most likely related to hot material from the Beta Regio and Phoebe Regio mantle plumes, and implies that these plumes must still be active.

An intriguing possibility is that Devana Chasma is actually two distinct rifts, with the northern segment being produced by stresses from the Beta Regio mantle plume and the southern segment being produced by the Phoebe Regio mantle plume. This segmentation is suggested by a variety of observations of the rift in the region between 7° and 10° North latitude. These include a 600 km lateral offset in the rift location, a 60° reorientation in the fault direction, a strong reduction in fault density and horizontal extension, minimal rift flanks, and the absence of a mantle density anomaly. The observed fault patterns near the boundary between the two rift tips suggest an interaction between the stress fields associated with the rift tips. This would require that the Beta Regio and Phoebe Regio mantle plumes overlapped in time.

Mantle Plumes and the Volcanic Highlands

Sapas Mons is the volcano in the center of this radar image of Venus. Sapas reaches a peak height of 2 kilometers, with two calderas near its summit and volcanic flows that extend for hundreds of kilometers across the surrounding plains. Two more volcanos, Maat Mons and Ozza Mons, are visible on the horizon. Maat Mons is 8 kilometers high, one of the highest features on Venus.

Mantle plumes are hot, roughly cylindrical structures that rise from deep in the mantle of a planet. On Earth, such plumes produce the volcanism observed in places such as Hawaii and Iceland. On Venus, similar mantle plumes are thought to produce features such as Beta Regio and Atla Regio. These features are both more than 2000 kilometers across, much larger than the coronae discussed below. Both Beta and Atla are regions of high topography, have one or more large shield volcanos, and have rift zones and extensional faulting. The volcanos shown in the above image, Sapas Mons, Ozza Mons, and Maat Mons, are the main volcanos in Atla Regio.

The hot, rising mantle plume model can explain each of these observations. The rising material pushes the surface of the planet upward, producing elevated topography. This uplift also stretches the crust, forming the observed rifts. The hot material may melt as it approaches the surface, producing the observed volcanos. A more quantitative test involves computer simulations of mantle convection. Such models can predict both the amount of topographic uplift that a given mantle plume can produce as well as how gravity will vary with location near the plume. Computer models of mantle plumes on Venus agree nicely with observations of both the gravity and topography of Beta Regio and Atla Regio that were measured by NASA's Magellan mission. The preferred model has the plumes originating at the base of the mantle of Venus, at a depth of 2800 kilometers. The plumes have a maximum temperature that is 300 degrees Celsius hotter than normal mantle on Venus. For comparison, the Hawaiian mantle plume is believed to be originate at the base of the Earth's mantle (depth 2900 kilometers) and to be 250 to 300 degrees hotter than normal Earth mantle.

The Structure of Large Coronae

Aruru Corona, 450 km across, has a well defined annulus of faulting and prominent volcanic flows.

One of the prominent types of volcanic and tectonic structure on Venus are coronae, which are circular to elliptical features a few hundred kilometers across. Coronae are thought to form when hot, buoyant blobs of mantle material push up the surface of the planet and create a localized zone of volcanism. Eventually, the hot blob will dissipate its heat and the volcanic activity will cease.

I have analyzed gravity observations for several prominent groups of coronae, including Parga Chasma, Hecate Chasma, Themis Regio, Eastern and Central Eistla Regio, and Artemis. Analysis of the gravity and topography data for these regions indicates that many of these coronae are regions of thicker than normal crust, which is consistent with the observed evidence for volcanism. In some cases, the gravity also shows evidence for hot, low density material in the mantle beneath some of these coronae and rifts, suggesting that these features may remain volcanically active at present. In other cases, the coronae no longer show evidence for hot material in the mantle. These features are evidently geologically extinct.

These results support a model for Venus in which the planet has an active interior and complex, on-going surface geology. On the other hand, some researchers have argued that most geologic activity ended on Venus 500 to 800 million years ago. The results of the gravity study are inconsistent with such a model.

How Thick is The Lithosphere on Venus?

The lithosphere of a planet is the strong, outermost portion of the planet. The thickness of this layer depends on the temperature inside the planet. Planets with hot, active interiors will have thin lithospheres. Planets with cold, inactive interiors will have thick lithospheres. By studying the gravity over features such as large volcanos, it is possible to place constraints on the thickness of the lithosphere of a planet. Thus, in an indirect way, the gravity measurements can tell us about the temperature structure of a planet.

I have used these ideas in a study of eight large shield volcanos on Venus. The results of this study indicate that the elastic lithosphere in these regions of Venus ranges between 10 and 20 kilometers thick. These results indicate that Venus has a hot, active interior.

For more information about Venus: