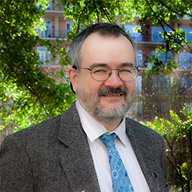 Research on the evolution of terrestrial planet surfaces, lithospheres, and interiors, with emphasis on growth and development of large volcano-tectonic structures on Mars, Venus, and Earth. Analysis of topography, gravity, and image data from planetary missions, to examine global thermal history, volcano morphology, and lithospheric strain. Modeling of stresses and deformation in growing volcanic edifices and the lithosphere.

I study gravity/topography relationships, lithospheric loading, and volcano-tectonic interactions on the terrestrial planets, with the goals of constraining planetary thermal evolution and evaluating scenarios for the growth of volcanic constructs. The following paragraph contains brief summaries of my work in these areas. Studies of Martian gravity and topography relationships, using Mars Global Surveyor (MGS) data, have constrained the thermal history of that planet and have yielded insight into the origin and evolution of features such as volcanic shields and domes, troughs, escarpments, and impact basins. One particular focus of my work is the immense shield volcano Olympus Mons on Mars. Gravity/topography studies of the lithospheric response to local and regional loads in the Olympus Mons region have constrained subsurface crustal and lithospheric structure and unit volumes. An ongoing project to identify the formation mechanisms of the enigmatic aureoles surrounding the Olympus Mons edifice involves the aforementioned gravity and lithospheric modeling, characterization of the dimensions and properties of individual aureole lobes, and particle-based modeling of mass-movement (e.g., landsliding) and volcanic flow (e.g., pyroclastic flow) aureole formation mechanisms. Models of volcanic edifice growth coupled with lithospheric flexure have yielded new insights into the conditions under which volcanoes with various topographic and tectonic characteristics can form. Recent work has demonstrated the importance of intra-lithospheric subhorizontal intrusions (sills) for the formation of dome-like volcanic topography with accompanying mid-flank annular faulting. Such models, applied to the Martian volcano Alba Patera in a recent paper, are being exploited to interpret the formation of volcano-tectonic features on other planets. Examples include a group of large volcanoes on Venus exhibiting such characteristics (some also classified as coronae), as well as the terrestrial analogoues that inspired the sill-based models, the flat-topped domes of the Galapagos Islands.