The Poles of the Moon

Plate 1
Image mosaic of the north pole of the Moon obtained by wide-angle version of the Lunar Reconnaissance Orbiter Camera (LROC). Cast shadows at the pole contain areas of permanent darkness, where water in the form of ice is stable on the surface. This mosaic covers the polar area northwards of 80° latitude; he area shown is about 600 km across. Hi-res image

Plate 2
Topographic map of the north pole of the Moon obtained from LRO laser altimetry. The LOLA experiment shoots laser pulses to the surface; the round trip time is measured and converted into a range, from which the spacecraft orbit is subtracted, leaving a surface elevation. Colors indicate the elevation (in 500 m increments) relative to a sphere of 1738 km radius about the Moon's center of mass. This mosaic covers the polar area northwards of 80° latitude; the area shown is about 600 km across.
Hi-res image

Plate 3
Map showing the surface temperatures of the north pole of the Moon from the LRO DIVINER thermal mapping spectrometer. Colors indicate mean surface night temperatures in Kelvin. Note the prevalence of extreme cold inside some craters, with temperatures as cold as 25–30 K. This mosaic covers the polar area northwards of 80° latitude; the area shown is about 600 km across. Hi-res image

Plate 5
Mosaic of Mini-RF radar image strips of the lunar north pole. In this image, color corresponds to the backscatter qualities of the terrain. Blue indicates single-bounce reflections, red indicates double-bounce backscatter and green indicates unpolarized backscatter. The strong yellow colors (high circular polarization ratio, CPR) associated with crater deposits may be caused by rock or ice deposits; craters with high CPR both inside and outside their rims are probably rocky, while craters with dark floors and high CPR confined inside the rims probably contain ice deposits. Hi-res image
Banner Slider 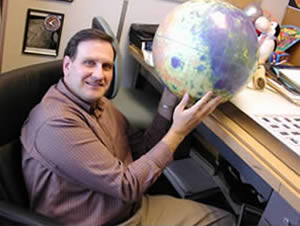 The poles of the Moon are unique environments and preserve a surprising record of water and other volatile substances on the lunar surface. The spin axis of the Moon is nearly perpendicular to the ecliptic (the plan in which the Moon orbits the sun) so that the sun always appears just at the horizon at the poles. NASA's Lunar Reconnaissance Orbiter (LRO) spacecraft has mapped the terrain and topography of the Moon, showing us the landforms and locations of ridges, mountains, and holes. Because of the craters and mountains of the Moon, some areas near the pole are in near-permanent sunlight while others are permanently dark. The DIVINER instrument on LRO has measured the surface temperatures of the polar regions and find these dark areas to be extremely cold, never reaching surface temperatures greater than about 25° to 30° above absolute zero (–272° C). Consequently, the extremely cold temperatures in these areas permit any volatile substance, like water, to accumulate there.

Water is present at the poles of the Moon in several different forms.  The Moon Mineralogy Mapper experiment on the Indian Chandrayaan-1 spacecraft mapped the 2800 nm spectral channel, a band where a significant water absorption feature is expected. Surprisingly, water is detected above about 65° latitude, consistent with a monolayer of water (H2O) or hydroxyl (OH) on dust grains in the regolith.  The strength of the absorption increases poleward (with decreasing mean surface temperature.) Additionally, the Mini-RF experiment on LRO mapped the poles with radar. Results show that some craters near the pole contain material with high RF backscatter, known as high ratios of circular polarization. These anomalous craters, which all have permanently dark floors, show high CPR in their interiors but low CPR outside the crater rim. These results are consistent with the presence of relatively pure water ice, meters thick. The nature, distribution and concentration of water at the poles of the Moon must be verified and mapped in detail by a properly equipped surface rover to determine the nature and extent of lunar polar volatiles.