The Lunar Reconnaissance Orbiter Camera (LROC) images have revealed paths where rivers of once-molten rock flowed on the Moon. Some of these rock-rivers are surprising because they occurred on the rims of small, young impact craters. Rock can be melted during the extreme pressures and temperatures associated with an impact cratering event, but craters less than about 5 km in diameter were once thought to not produce enough melted rock in order to initiate flows. Ponds of melted rock can now also be seen in the floors of craters only a few hundred meters in diameter.

The shapes and depths of impact craters, determined from LROC NAC stereo-derived topography (digital terrain models), indicate that craters less than about 400 meters in diameter are usually relatively shallow (lower depth-to-diameter ratios) compared to their larger (simple) crater counterparts. This was an unexpected discovery in the LRO/LROC data! Various factors can affect the morphologies and relative depths of small craters – including impactor and target properties, impact angle and velocity, and degradation (such as landslides). However, these small and shallow craters are consistent with formation in a regolith target and reflect local regolith thickness and evolution.

A variety of relatively small-area volcanic deposits have erupted onto the Moon’s surface over time. These deposits include silicic lava flows and domes, irregular mare patches (or IMPs), and pyroclastics.

Small, cinder-cone-like, volcanic vents, each less than 3 km in diameter and a few hundred meters in height, have been recently resolved in the high-resolution LROC images. We can now resolve individual layers including spatter and lava flows. Enhanced concentrations of small volcanic vents superposed on several large topographic rises suggest mantle hot-spots, where volcanism may have occurred intermittently over billions of years.

LROC images also reveal the crisp, fresh morphologies of the IMPs that signify recent eruptions, and that the Moon could have been volcanically active in the last 100 million years. A discovery that is surprising because most scientists thought that the Moon’s interior had cooled long ago (nearly one billion years ago)!

Some steep-sided topographic rises, or domes, are associated with unusual compositions. Using recent LROC images, flow fronts and stratigraphic relationships of these domes have finally been revealed. Several of the steep-sided rises, such as the Lassell Massif, are composed of erupted silicic lava flows, pyroclastics, and other volcanic deposits.

Madrid M. and Stopar J. (2018) The age of volcanism north and east of the Aristarchus crater. 49th Lunar and Planetary Science Conference, abstract 1071.

There are presently no known samples of small-area volcanic deposits in our sample collection. Such deposits, due to their potential to inform interior processes and volatile inventories, are high-priority exploration targets. Other areas of the Moon are important destinations, too, because of their unusual compositions, unique solar illumination conditions (e.g., shaded polar regions), or their potential to constrain the sequence and timing of key events on the Moon (for example, earliest basin formation, or youngest lava flow). By using geologic knowledge gained by studying data from LRO and other spacecraft, we can better plan successful and useful forays to the lunar surface in the years to come. 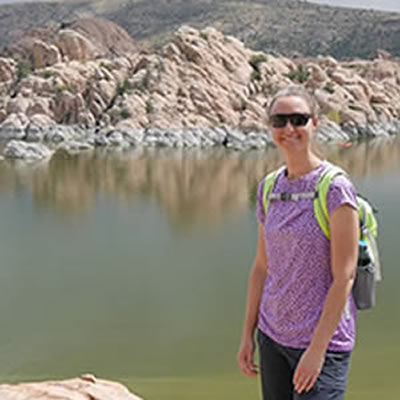 My other research is focused on determining the results of water-driven chemical reactions throughout the Solar System, including low-temperature mineralization on Mars and water-mineral interfaces at the poles of the Moon.

Back to Staff Profile