Surface Processes: From Accretion Through Habitability

Iapetus, a moon of Saturn, has both a heavily cratered surface and a tall and ancient mountain range on its equator that nearly wraps around the moon. Both of these features have witnessed the bombardment history of the Saturn system. As such, these surface features can help constrain models of how our solar system formed by providing geological evidence on the amount of material around when the planets were forming (i.e., the planetesimal disk mass). Hi-res image

Surface processes, such as impacts, on an icy satellite like Saturn’s moon Dione, depicted here, alter over time the type of water ice found on a satellite’s surface. The relative abundance of amorphous water ice (here shown from high to low as red to yellow) can then be used to date these features. Determining the ages for impact events allows us to estimate cratering rates, which in turn lets us refine our understanding of how our solar system evolved over time. Hi-res image

Large impacts on solid bodies can churn their outermost layers, altering the surface composition. This surface process, termed impact gardening, may explain Mercury’s so-called low-reflectance material (shown here as shades of dark blue). Impacts may have excavated a darkening agent, potentially carbon, from the planet’s mantle. By studying the present-day surface composition of solid bodies and pairing it with simulations of impact cratering, we can learn about their subsurface, ancient crust, and early history. Hi-res image

The Arecibo Observatory in Puerto Rico has the world’s most powerful and most sensitive planetary radar, making it invaluable for planetary defense. Its ultraprecise measurements of an asteroid’s speed and distance let us accurately predict its next near-Earth approach. Radar also lets us characterize an asteroid’s size, shape, spin, density, composition, and surface properties. Hi-res image

Life as we know it needs water; however, Mars’ cold temperatures generally rule out the formation of pure liquid water. Under these conditions, brines are the favored liquids because their freezing temperature is reduced by the salts. Data from rovers, such as the Mars Science Laboratory (MSL), can help decipher how liquid water is forming today on Mars.
Hi-res image

Under the right conditions, when water vapor comes into contact with salts, such as those typically found in the martian regolith, brines can form following a process called deliquescence.

This surface process on Mars may provide the right conditions for life as we know it to thrive. By studying data from landed missions, such as the Phoenix lander, we can investigate the habitability of present-day Mars.
Hi-res image 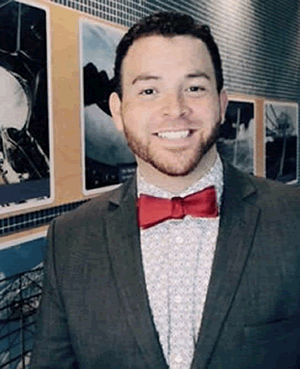 Dr. Edgard G. Rivera-Valentín is a planetary scientist with USRA at the Lunar and Planetary Institute who investigates surface processes on solar system bodies, such as impact cratering and atmosphere-surface interactions, using computer simulations along with space- and groundbased observations and laboratory measurements. Such studies help constrain the formation of our solar system, its evolution, and present-day processes that affect habitability, such as liquid formation and potential threats from impacts.